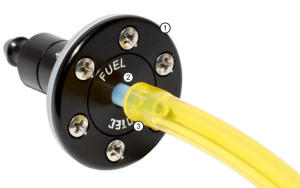 This shapely fueling valve made from massive aluminum (colored anodized) allows for clean fueling of models without gas reflux. Until now it was annoying when there was liquid reflux contaminating the model by removing the fueling hose. This is history when using EMCOTEC fueling valves.

The fueling valves serve for filling as well as emptying the tanks. Due to the high grade materials used (aluminum, stainless steel, Viton), all liquids used in modeling can be pumped (gasoline, smoke oil, methanol, kerosene, petroleum, diesel and even water).

Attention: For jets with more tanks (hopper tank) its possible that air could be sucked in because of negative pressure. In that case a ball valve which ensures reliable closing can be looped in into the tank pipeline.