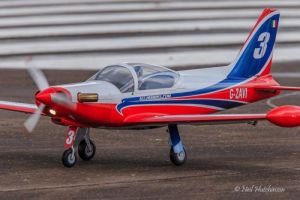 The SF-260 is one of the world’s most revered military trainers, with some 880 aircraft in service and 27 different military customers around the world. It was, and still is, marketed also as an aerobatic plane as well. Stelio Frati (the F in SF-260) designed this airplane in the early 60s for Aviamilano, which was later purchased by SIAI Marchetti (the S in SF-260). It is powered by a 260 hp 6-cyl Lycoming engine (denoted by… yeah, right, the 260 in the name…).

The flight characteristics, performance and style of the SF-260 are second to none, making it a favorite not only of military flight schools, but of airshow pilots, civil professional flying schools, and anyone who loves fast, beautiful, great-flying airplanes.

When CARF was looking for something different, something, which we wouldn’t see on every model airfield or show event, we were looking at the SF-260 for several reasons:

The wide fuselage is made entirely in a sandwich construction, to keep it light and stiff. The carbon reinforced engine dome will fit for single and twin cylinder engines, 2- and 4-stroke, and will hold the nose gear unit. Under the wide and strong two-part cowling is plenty of room. The large canopy is removable, readily installed with hooks and canopy latches, and can be developed into a sliding canopy with only little individual effort. A simple, vacuum formed cockpit with seats and dashboard is included in the kit as well, to cover the large opening.

Ultra strong do they slide on a 40 mm aluminum tube. The carbon fibre reinforced main gear mount feeds the landing forces directly into the wing tube and the fuselage. Ailerons and flaps are elastic hinged, the flap slot is covered with a rounded lip, making it look really good. The sexy tip tanks are mounted on a 20 mm aluminum tube and are removable.

Rudder and elevator are hinged in the classic CARF Method on 4mm hinge tubes in phenolic posts. All is pre-installed and ready to use. Control horns are also glued in. The fin is a permanent part of the fuselage, the two stab halves are removable. Servo mounts are installed in stab and fin, ready to drop any good, medium torque servos in.

As we have experienced with other airplanes, we could always rely on the Behotec C-50 retract units. So, we used them for the Marchetti as well. Airtech Germany trailing link struts with the correct angles and a Behotec nose strut, which we already use in the Tutor and Tucano. Conveniently the nose gear unit mounts against the firewall and the steering servo is directly attached to the strut. The set is complimented with lightweight Dubro wheels.

For our prototype we chose the Moki 100 four stroke twin. What a nice combination this is…! It isn’t the most powerful variant but definitely something very special. Quiet and smooth. For glider towing and more powerful flying up to 120 cc two stroke twins can be installed. Even engines like the old faithful Zenoah 62 will work very well and pull the CARF Marchetti with authority.

There was no way past doing this airplane one day. Motivated by a full scale SIAI Marchetti SF-260 pilot, Ralf Niebergall, CARF took over a half finished project from a small company in Germany, AeroFlug. In due course, most of the aerodynamic design had been re-done in CAD, wings and stabs CNC-milled for precision, so that the first flight of our model didn’t surprise us at all: