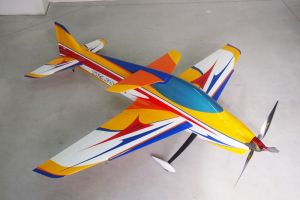 During a process of new Evolution, we have focused on F3A FAI sequence P-15 and F-15 which are going to be flown in 2014-2016.
Our goal was to increase rudder authority and redesign the shape of fuselage ( new canopy with a canaliser, new motor cowl and new rudder), and increased aileron response. All these changes were done to improve knife edge flight and snap rolls (F-15) Important was a development of canaliser, which is to be used on Spark for the first time.  We have tested few different wing designs and shapes.

It was a long way, but we are convinced we reached the best set up. Canaliser is very effective.

KRILL MODEL is also introducing a revolutionary cooling system for “classic”el. motors and also for motors with gear boxes . One a air nozzle is for cooling the speed controller also.  Our “ AIRBOX” is very effective and combined with a low weight  (12gr) is a must for F3A model.


A short comparison Evo I and Evo II and differences from other F3A planes:

We are convinced that a new Evolution II will surprise you.

However, this time we do not allow to change colors, as it was before.

The kit is include  (hardware) : the landing gear of C/F , the wheels, the spats , the tail wheel , the axles, the wing bolts and CNC control horns of F/G.

There are accessories available on order form for this airplane.