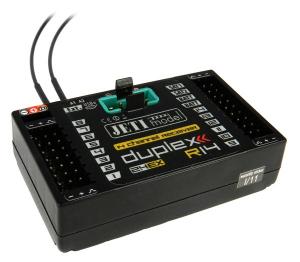 The DUPLEX EX line of receivers is Intended for surgery with DUPLEX Tx transmitter modules in the 2,4GHz band-and are fully compatible with the previous version of the DUPLEX. Thanks to the fully digital and bidirectional communication between transmitter and receiver there arise completely Call new aspects in the model remote control branch. One of the most important advantages is the operational without crystal, more over the low susceptibility towards interference, the high range up to the limit of visibility and the Possibility to follow anytime the onboard state of the model and its functional parts.
An additional satellite receiver RSat2 complements the receivers R9, R10, R11, R12, R14 and R18. This receiver is a full DUPLEX system receiver offering the complete functional spectrum of the system. Instead of classical servo pulses the output of the RSat2 receiver offers a

signal at the input.

DUPLEX EX system is fully compatible with the previous version of the DUPLEX.

This receiver has possibiliety for connection next receivers so called receiver satellite - DUPLEX Rsat2 (for buying separately). Power supply is provided throught MPX connector or usual JR connectors. For each output is possible to assign any channel due to JETIBOX. For using more servos to one function isn´t necessary using V-cable. R14 connected with voltage regulator MAC BEC 2 ables protection of reliable power supply.

DUPLEX System EX is fully compatible with the previous version of the DUPLEX.