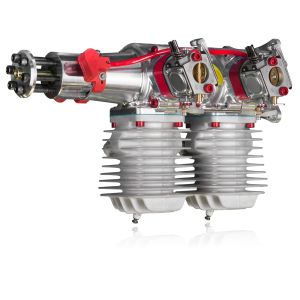 Based on the DA-100L, Desert Aircraft developed a very impressive inline engine.
The DA 100I is a computer designed high-performance model aircraft engine. The perfectly balanced and harmonized design of the piston, conrod and crankshaft was achiefed with the help of a computer simulation program. The DA 100I has the lowest vibration levels in it`s class over the entire throttle range.

Because the cylinders fire in succession, one after the other, the DA-100I has a sensational smooth and low idle of about 800 RPM.

The throttle response, as usual with all Desert Aircraft engines, is very spontaneous. This is achieved by the two separate carburettors and the resulting low crankcase volume.
The reed valves developed by DA and the Walbro carburettors are perfectly adapted to the engine, giving an evenrunning engine in all attitudes and throttle settings. Aluminium throttle arms and a connecting rod are fitted to the carburettors.

As with all DA engines, the DA-100I has been factory test run and the carburettor needles adjusted. Desert Aircraft is famous for their first class world wide service and support.
The DA-100I is not only the ideal engine for your high performance warbird, due to its smooth, DA-200 like running characteristics, the DA-100I is also a convincing aerobatic engine.