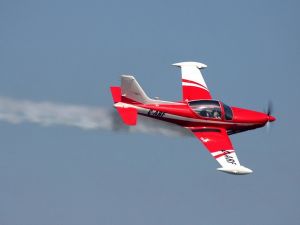 The SF-260 is one of the world’s most revered military trainers, with some 880 aircraft in service and 27 different military customers around the world. It was and still is marketed as a civil aerobatic plane as well. Stelio Frati (the F in SF-260) designed this airplane in the early 60s for Aviamilano, which was later purchased by SIAI Marchetti (the S in SF-260). It is powered by a 260 hp 6-cyl Lycoming engine (denoted by… yeah, right, the 260 in the name…).


The flight characteristics, performance and style of the SF-260 are second to none, making it a favorite not only of military flight schools, but of Airshow pilots, civil professional flying schools and anyone who loves fast, beautiful, great-flying airplanes.

TheTurbo Marchetti is a rocket ship! The power of the SPT5 in this airplane is unbelievable, so a high visibility scheme is a must. Towing gliders up to 25 kg with this amount of power is an incredible experience...

There is no difference in flying characteristics, if you look at the 260 TP version:

The wide fuselage is made entirely in a sandwich construction, to keep it light and stiff. The carbon reinforced engine dome provides strong hold for single and twin cylinder engines, 2- and 4-stroke, as well as for the nose gear unit. Under the wide and strong two-part cowling is plenty of room. The large canopy is removable, readily installed with hooks and canopy latches and can be built as a sliding canopy with only little individual effort. A simple, vacuum formed cockpit tub with seats and dashboard is included in the kit as well to cover the large opening.

The wings carry a new design airfoil for a wide speed range. Ultra strong do they slide on a 40 mm aluminium tube. The carbon fibre reinforced main gear mount transfers the landing forces directly into the wing tube and the fuselage. Ailerons and flaps are elastic hinged, the flap slot is covered with a rounded lip, making it look really good. The characteristic tip tanks are mounted on a 20 mm aluminium tube and are removable.

Rudder and elevator are hinged in the classic CARF method on 4mm hinge tubes in phenolic posts. All is pre-installed and ready to use. Control horns are also glued in. The fin is a permanent part of the fuselage, the two stab halves are removable. Servo mounts are installed in stab and fin, ready to drop any good, medium torque servos in.

From experience with other airplanes we could always rely on the Behotec C-50 retract units. So, we used them for the Marchetti as well. Airtech Germany trailing link struts with the correct angles and a Behotec nose strut, which we already use in the Tutor and Tucano. Conveniently the nose gear unit mounts against the firewall and the steering servo is directly attached to the strut. The set is completed with lightweight Dubro wheels.

The wide fuselage is made entirely in a sandwich construction, to keep it light and stiff. The CARF Models SIAI Turbo Marchetti is designed to suit the JetCat SPT-5 Turboprop. This engine performs really well and suits the plane perfectly. A specially designed engine mount box from Carbon Fibre makes it easy to install the engines accurately, and operate them safely. CARF Models has done extensive research and teamed up with JetCat to really build this airplane around these proven engines.

Additionally a new, 280mm longer cowling was designed. JetCat has designed a special bottom exhaust outlet for their SPT5 to for the Turbo Marchetti perfectly. And CARF-Models designed the matching bifurcated exhaust pipe for it.

Spinner, Exhaust-System and Porpeller are available as accessories.

So, there was no way past doing this airplane one day as a Turboprop version as well.