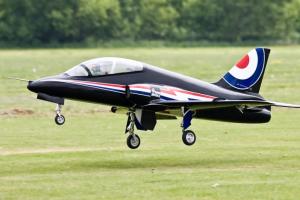 How long have you wished that CARF Models make one? Well, the wait is over. In cooperation with Skygate Collection, another company producing first class jet models and friend of CARF Models, a BAE Hawk with the perfect dimensions was designed and molded.

Our Hawk is not a fully detailed museum scale replica of the full size aircraft. There are other planes on the market with highest scale fidelity, a mistake if we wanted to compete with them... Also there are a lot of cheap Hawks on the market, which don’t fly right, don’t look right and are an engineering disaster. CARF Models wants to stay away from both extremes and bring a right sized BAE Hawk to you with the following features:

The CARF approach at this popular project is giving you the most value for money - guaranteed! We focus on both Sport and Scale. Lets list a few of the advantages of each category and explain how it is built into our Hawk:

Sport:
- easy and fast to build due to highest prefabrication
- breathtaking flying characteristics due to ingenious aerodynamical and structural design
- painted in the molds in many different attractive designs, with even the possibility of real custom schemes.

Scale:
- most impressive appearance on the ground and in the air due to perfect outlines
- panel lines molded in as a great base for further scale detailing
- gear doors and landing gear is in scale position and geometry, so both an economical sport gear or a full scale landing gear can be used.

We wanted our Hawk to be the best flying Hawk out there, suiting the scale perfectionist as well as the sport and performance pilot, requiring only a minimum in building time and skills. We know that you want to fly - not build.

And we wanted our Hawk to be the best and easiest building Hawk out there, too. That means, the engineering of the design had to be bullet proof, it had to incorporate the most complete solutions and it had to be meticulously tested and by several highly active pilots, to show weak points, if any, and allow the fixes before the kit was released. It had to be intelligently prefabricated as much as possible, still giving you some room for customization.

However, we don’t want to miss getting a strict CARF policy clear, too:

What does it help if gear and gear door cylinders are installed from the factory and half of them leak? What does it help if fuel tanks are factory installed and plumbed, if the engine quits during the first flight because of a clunk not being secured properly? We think, that there are definitely some areas of work which the factory shouldn’t touch, if not only 100% professional and experienced builders and flyers are working on it. And honestly, this is not possible in a serial production – not in Thailand, and not in China. So CARF’s concept is that prefabrication ends at a certain limit, and on top of that, you as the owner and pilot must do the last steps to make sure that you’re satisfied with the most crucial installation. Don’t you think so, too?