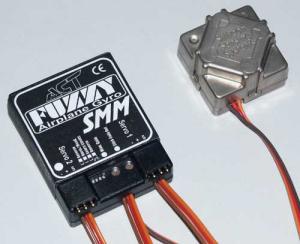 Specialised for Jet Models
Jets do have long fuselages and very often short wingspans. The mass of the modell is high. This needs special gyro characteristics, as there are very high speeds and even low speed is fast. The FUZZY SMM Jet can also be used at tailerons, as it has an inbuilt mixing recognition.

Normal- and Heading use (AWCS)

The FUZZYSMM Jet is the best gyro system for jets ever. It can stabilise all model axis as rudder, elevator and ailerons. It stabilises one of these model axis.

Juni 2011
The producer of the SMM sensors has cancelled our sensor type and issued a new type, which is better, but also more expensive. In spite of that, we we will use it with our product, even we must increase the prices for it. But the perfomance the sensor has is so perfect, that we say, even it is € 50.- more now, it is worth each cent. All German world champions of the last 10 years can confirm that.

We tried to change to so called MEMS Sensors, which nearly everybody is using now in the modelling scene, as it is very cheap, compared with peformance. After studying the data sheet and lots of tests, it was clear for us, we will not use MEMS, we stay with SMM. MEMS is good for turning smartphones or installing it in cheap modelling products, but not as good as we need it for our Jet Gyro.

Even the comparisson is not quite fair, as MEMS are designed for consumer products, and SMM for military highest use,

We think it is obvious that a cheep sensor can`t replace the 100% perfect sensor in our SMM gyro.